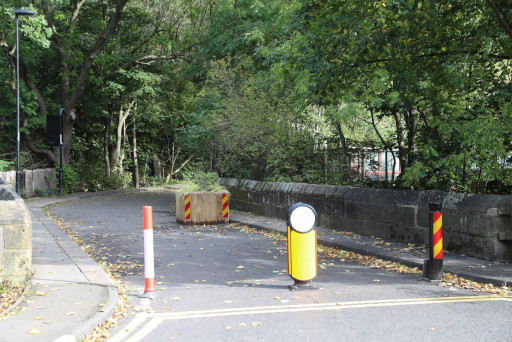 We have identified a number of small bridges across the city, which are not key routes, but are being used by higher levels of traffic than is appropriate. By closing these bridges to traffic, we can re-allocate them for people on foot and bikes, making it safer and easier for people to get around their local area, and reduce levels of unnecessary traffic using local roads. The bridges chosen are in locations where residents and other key groups have expressed safety concerns for people walking and cycling over the bridges. These include:

Please visit the consultation website here to read the full documents and have your say: Newcastle Bridges Low Traffic Measures 2021. If you have any questions about this, please email us at: Traffic Notices

How exactly can you possibly justify the additional pollution your incredibly selfish 'added very little journey time' will create EVERY single time you make that 'very little journey'. Do you think that just disappears when you take a different, longer route?

Try multiplying that pollution by the hundreds of thousands, if not millions, of vehicles that will now be forced to make that 'very litlle journey' every single year as a direct result of these stupid proposals.

Even if you have to travel one extra inch that's an extra inch of pollution but the problems is that it isn't inches IT'S POTENTIALLY MILLION OF MILES and TONNES of added pollution caused by short-sighted people like you who can't even see beyond the end of their noses!

WAKE UP AND SMELL THE POLLUTION. IT'S KILLING THE PLANET!!!

I am all in favour of measures which benefit cyclists and especially pedestrians. In densely built up areas such as Jesmond more journeys should take place on foot, cycle and possibly the new hire scooters about to arrive in Newcastle, which is a healthier option and essential to contribute to combating climate change.
I would encourage improved provision for cars used by people who are genuinely disabled. This does not include people in gigantic cars taking very short journeys in Newcastle.
I know that the closure of Castle Farm Road bridge to vehicles has seen an amazing number of people walking and cycling on this section of road, from both directions, as a means of getting to the Dene, Paddy Freeman's park, Freeman hospital, The Ministry, Schools and recently used by children as a sledging slope!! It has become part of Jesmond Dene again - so peaceful - its beautiful. The idea that the footpath across Castle Farm Road Bridge was adequate is ridiculous, as it is not even wide enough for two pedestrians to pass each other without stepping out into the road, let alone an adult with small children and/or a pushchair. As a cyclist across this bridge - cars frequently ignored the right of way and headed straight for you expecting you to get out of the way!
I frequently used the bridge as a car driver, and now go via South Gosforth - this has added very little journey time - if any - as the new road layout is fast and efficient - unlike sitting either side of the bridge in a queue of vehicles waiting to cross.
The same goes for the case for closing Haldane Road bridge.
Closing the bridges is definitely a step in the right direction if the council want their ambition of creating cleaner, safer, healthier, and greener neighbourhoods in Newcastle for now and future generations to happen.
The council has a duty and the power to make this become a reality.
Closing the bridges is only a tiny part of making our city contribute to people's wellbeing and climate change, but this is a start and little changes will lead to bigger and better things.
Please keep the bridges closed.
Thank you.

Hi everyone, thank you very much for your comments. If you haven't done so already, please go to the website for this consultation, where you can read the full proposals and give your views in detail on each one (closing date is 15 February 2021): https://safenewcastlebridges.commonplace.is/about
(If for any reason this link does not open automatically, please copy and paste it into your browser.)

I welcome the action taken by the City Council under the Experimental Traffic Regulation Orders to close several bridges, and in particular, Dene Bridge, Castle Farm Road, near to where I live and which I walk or cycle over moist days, and drove over before the closure.

I think that it is a step in the right direction of realising the ambition you set out for safer, cleaner and greener neighbourhoods. I am. very aware that closing the bridges has proved hugely inconvenient for many people. We also have to take the slightly longer route to Matthew Bank, but so far this has never felt to take more than a couple of minutes at the most, not least because of the huge improvements to traffic flow at the Haddricks Mill junction. I hope however that the disputes about individual bridges does do distract from the wider vision.

The issue of the bridges does encapsulate the three aspects of the ambition, and illustrates the need for an integrated strategy which includes: how we better enable movement of people across the city; health and wellbeing; environment.

The understandable protest against the bridges' closure is obviously because each one provides part of someone's route in their journey across the city when alternatives are not as suitable, more congested or more time-consuming. As the number and size of cars, and vans, increase, the unsuitability of a road system built for a different era becomes ever more apparent. Castle Farm Road is an obvious example. Until the closure, for a couple of hours in the morning and late afternoon it was already at capacity. The road traffic statistics for Newcastle show a rise in miles travelled per annum by all vehicles from 1.12 billion miles in 2016 to 1,209 in 2019, and for cars an increase from 931 million to 1.01 billion. A Department of Transport Report suggests that car traffic could rise by between 11% an 43% from 2015 to 2050, and that LGV traffic has the potential to double in the same period. An increase of cars and commercial vehicles on this scale on some of the roads like Castle Farm through a residential area with a narrow one carriageway bridge is clearly not sustainable. What is needed is the provision of viable alternatives to the singe person use of the car, better public transport, and more attractive walking and cycling facilities.

During the closure of Dene Bridge the number of people walking and cycling has increased greatly, people walking to and from work, presumably at the Freeman or the Ministry; parents and children walking or cycling to school; runners of various ages; families, often with children on bikes, coming down the road or up from the entrance to the Dene by the bridge. It has brought about a change in the feel of the environment. Some passing by have spoken of how pleasant it is to have that walk after work. The bridge and its surroundings have in a sense been brought back into being part of the Dene, one of the jewels in our city, and there is now also easy access from the bridge, largely traffic free, into Paddy Freeman's Park.

Walking and cycling is I know one of the things the City Council want to encourage. Both contribute not just the physical health, but to a greater sense of wellbeing. Before the closure neither were pleasant or safe, especially on the bridge, with its narrow path for pedestrians, and a one directional flow system frequently ignored by vehicle drivers when cyclists were attempting to cross.

Those of us who live nearby, and the increasing number of people who cycle or walk past, have been the beneficiaries of cleaner, better quality air, and less noise during the closure. Air pollution can be an abstract concept until you experience it more directly. Not infrequently we have woken in the morning to the smell of fumes from either stationary or very slowing moving cars as they queue to cross the bridge. That concentration of poor air quality will have been present on the bridge, if less obvious.

Closing a few bridges is not going to do much on its own to realise the ambition of increasing the safety, cleanliness and greenness of the neighbourhoods in which people live, unless it is accompanied by a focused effort on transport across the city, including the use of green energy; an attention to air quality and an encouragement to healthy living, exercise and eating well; and on ensuring good access to the natural environment.

Firstly, closure of Haldane Bridge is not 'unproblematic' for those of us unlucky enough not to be able to afford the luxury of electric cars - cars that just move the pollution problem from the street to the power station (or if you're very lucky the wind farm).

To use the 'other' bridge ALL traffic using this route now has to go via traffic lights which have to be one of the least environmentally friendly methods of controlling traffic ever invented.

At almost all times of day drivers are forced to queue or at least wait for the lights to change, belching more pollution into the atmosphere. If just one single vehicle is forced to travel just one extra unnecessary inch then that it is adding to the problem. Once you multiply that by the tens of thousands of vehicles involved, the damage is immense.

Every one of these closures is forcing drivers to drive extra MILES, not inches. This is for no good reason whatever, and as far as the environment is concerned, for VERY bad reasons indeed.

It may be very nice for you to be able to sit in your Toyota Pious and know that your pollution has been moved somewhere else. Maybe consider the entire planet and not yourself for a change.

I don't care about drivers having access to these bridges, although the short-cuts are both useful and environmentally friendly. I care passionationely about the environment we live in and the influence of one individual who has done his level best to force every vehicle in this city to use routes that mean they are making the air quality worse, while
pretending that this is for for the benefit of cyclists and walkers. It's just madness.

All this is to say absolutely nothing about the utterly scandalous waste of money whilst libraries and youth centres being closed on a daily basis. This department and this council are both just out of control and completely out of touch with reality.

It's no coincidence that this so-called experiment was put in place in the middle of a pandemic. Any results are going to be complete nonsense and prove nothing. It's no coicidence that this survey was only made available days before the consultation ends. This is manipulation, sleight-of-hand, and a complete sham.

Again, I'll ask. Where's the research? Where's the data? Where are the facts? This was never intended to be an experiment of any kind. If that had been the case it would have been carried out with normal traffic levels.

This is just being forced down our throats yet again and, yet again, the environment suffers AND THAT AFFECTS US ALL!